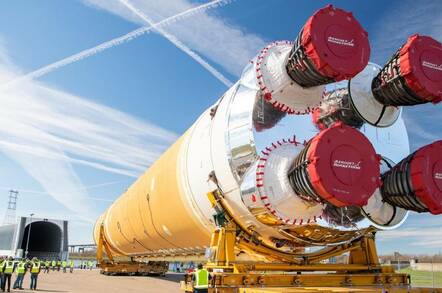 NASA has picked an engine supplier for its controversial Space Launch System (SLS) program weeks after an audit chastised the space agency for blowing its budget.

The space agency said on Saturday it will plunge $1.79bn into a new order of 18 RS-25 engines from Aerojet Rocketdyne. The engine, which was originally developed for the Space Shuttle Program, will provide some of the thrust power to the SLS, the primary launch vehicle NASA’s deep space exploration plans. This includes the Artemis program, which hopes to put "the first woman and the second man" on the Moon by 2024.

"The same reliable engines that launched more than 100 space shuttle missions have been modified to be even more powerful to launch the next astronauts who will set foot on the lunar surface during the Artemis missions."

The new contract comes weeks after an audit criticised the space agency for long running delays and overrunning costs on the SLS Program. In the audit, the NASA Office of Inspector General said that the space agency had spent $17bn on the program, at least 30 per cent more than its Agency Baseline Commitments by the end of fiscal 2019.

The SLS has been troubled for some time now. Bean counters in Washington have put the cost of the system at $2bn per launch. What's more, the system's single-use hardware contrasts poorly with re-usable kit from rival systems from Jeff Bezos's Blue Origin and Elon Musk's SpaceX.

NASA has contracted with three companies to develop the major elements of the SLS. Boeing will develop the core and upper stage; Aerojet Rocketdyne will make the engines; and Northrop Grumman will develop the solid rocket boosters.

With the new agreement, NASA has committed $3.5bn to engines for up to six SLS flights, giving the program wings until 2029. Aerojet won its original $1.16 billion contract in 2015 to upgrade 16 existing RS-25 engines left over from the Space Shuttle Program which would be used to power the first four Artemis missions. The contract was expanded to include six new RS-25 engines, which will begin delivery in 2023.

The SLS booster was slated to make its first top-to-bottom flight during the second half of 2021. But that date is likely to be delayed after its John C Stennis Space Centre in Mississippi was cleared out following an employee testing positive for COVID-19 earlier this month. ®

Sponsored: How to Build Your Digital Experience Portfolio

What if we could redo the Packers’ disastrous 2015 NFL Draft? - Acme Packing Company

Tracy Morgan and His Lambo Have Alleged Collision with Pedestrian - TMZ

Timothée Chalamet, Armie Hammer Will Return for ‘Call Me by Your Name’ Sequel, Says Director - Variety